The second annual Project Steering Board meeting of the FP7 project DEMEAU took place on May 19th and 20th at the premises of KWR Watercycle Research Institute in Nieuwegein, the Netherlands. Project coordinator Theo van den Hoven welcomed the DEMEAU project members with a brief introduction of KWR, its services and activities and the scope and objectives of DEMEAU. Subsequently, the Work Area (WA) leaders had the opportunity to give a summarising overview of their work progress. As the project deals with different technologies, the goal of this meeting was also to encourage further exchange of knowledge and experiences, and to search for collaboration opportunities. 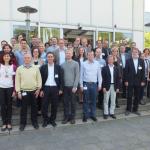 Following the introduction of Theo van den Hoven, appointed speakers from the work areas (WAs) gave detailed input on the conducted tasks: 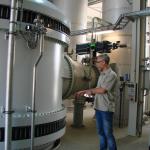 Visit to PWN SIX-ceramac® plant
During the afternoon, the DEMEAU project team visited the newly developed CeraMac® plant of water company PWN in Andijk. The development of this innovative technology and an introduction to the full scale ceramic membrane drinking water treatment system was given by Gilbert Galjaard, Director of R&D at PWN Technologies. Afterwards, a tour through the plant was organized and offered by PWN to the DEMEAU partners, giving them insight into the technologies developed and applied by PWN.

On the second day, firstly the Work Area leaders met to organise the follow-up of the meeting. In the plenary, Ruediger Wolter (German Federal Environment Agency) and Frederic Leusch (Griffith University) gave feedback to the project work in their function as members of the Project Advisory Committee (PAC). The PAC suggested emphasising the bigger picture of the project in order to improve communication to laypeople with a storyline that has been developed within the project. The 18 months report was approved without any objections by the plenary. Evelyn Lukat (Ecologic) presented the forthcoming dissemination activities for the project. She emphasised the importance of the utility events for the project.

After the plenary meeting, working group meetings were organised. As many WA’s do not regularly have the opportunity to have face to face meetings due to the geographic spread of the participants, many meetings within and across WAs took place. This is of special importance for WA 5 who elaborates on Life Cycle Costing and Analysis for the different technologies. This work will result in unique selling propositions for the DEMEAU technologies.

Agenda of the meeting